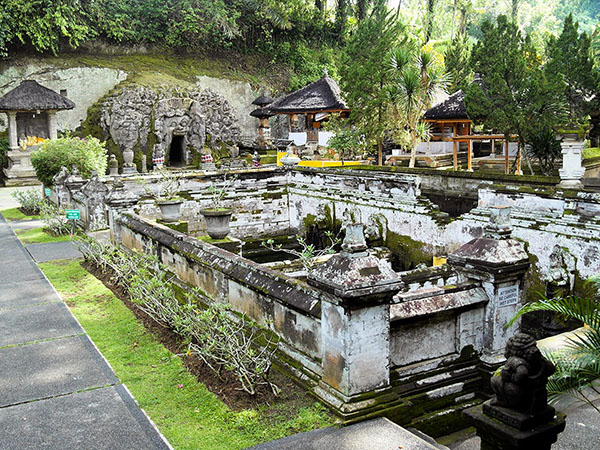 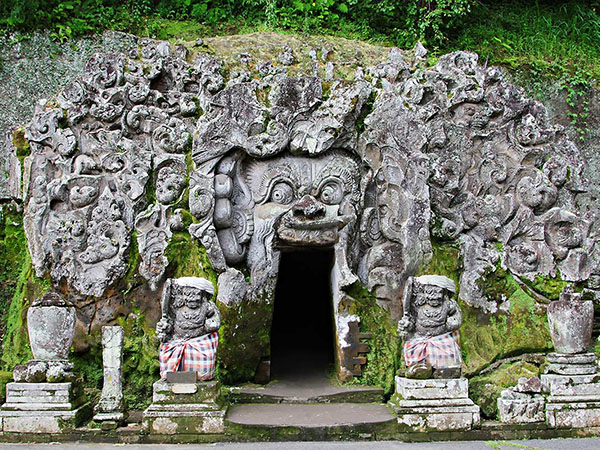 The mysterious Goa Gajah (elephant cave) is one of the oldest relics on Bali. The exact time of origin is uncertain, but archeologists estimate the cave to have been built around year 1022 AD. This was long before Majapahit entered the island, and also hundreds of years before the first Europeans set foot here. The site is a mix of Hindu- and Buddhist symbols, among them the cave with the entrance in an artistically carved cliff, a bathing pool with fountains, a statue of the Buddhist goddess Hariti, as well as several other Buddha figures.

The cave was only known by the locals until 1923, when a young Dutch found the place after hearing some conversation about a monster head with elephant ears. The Elephant cave which is the located in west side of bedulu countryside. Blah batuh sub district and gianyar regency. It is about 12 km from denpasar town. This cave is built at crevasse edge from the federation of 2 rills that is called pangkung river, where the irrigation is mixed with petanu river flow. The federation area of two rivers is called Campuhan/Mixture.

There is relief which is almost looking like the form of mountain on the entrance of this cave. Its was carved many designed on the relief like grove with the stick, close leaf, animal for example forest pig, tortoise, and specter. The cave mouth is decorated by the bas-relief with the eye turn around to the right or west side. There is an article letter of Kediri type from the early of 11 century was written on the wall left side or east side. There is a pool (patirthaan) as a place to take the Holy Tirtha Water from Hindu Ceremony which is located in the middle of the cave courtyard. This Holy Pool is previously piled up by land and it has been found on 1954 by Cragsman from the ancient Departeme nt. The Holy Pool is equipped by the statue douche which parallel arranged in two groups