Warning: "continue" targeting switch is equivalent to "break". Did you mean to use "continue 2"? in /home2/sugibali/public_html/wp-content/plugins/revslider/includes/operations.class.php on line 2734

Warning: "continue" targeting switch is equivalent to "break". Did you mean to use "continue 2"? in /home2/sugibali/public_html/wp-content/plugins/revslider/includes/operations.class.php on line 2738 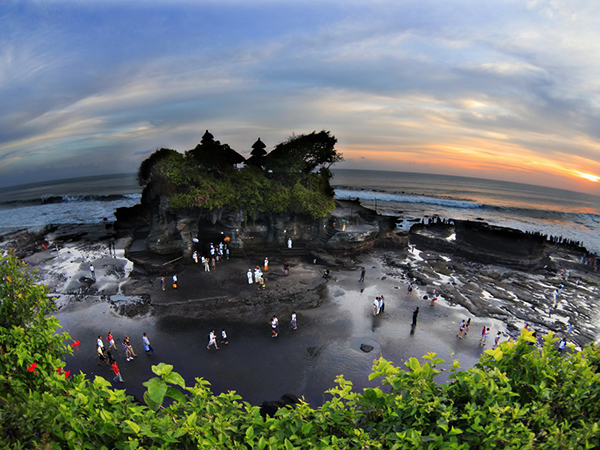 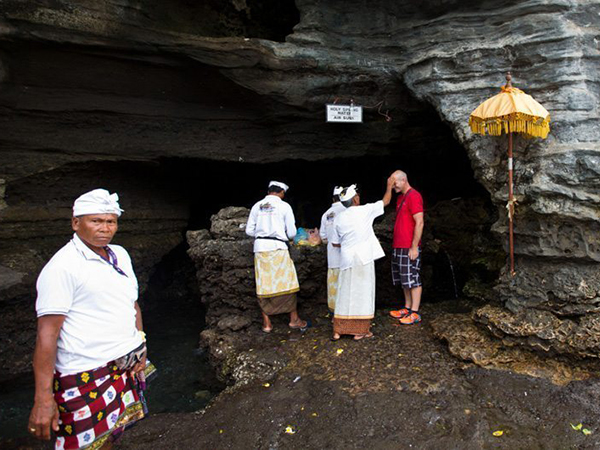 Bali Tanah Lot Temple is located in coastal side of Beraban countryside, Kediri sub district and Tabanan Regency. It is situated in 30 Km in west side of Denpasar town and about 11 Km in south side of Tabanan town. The temple is built on the rock with 3 acre size and reachable in a few minute by walk, because it is just 20 meters from the coastal lip. This temple is very famous among tourist destinations in Bali with spectacular view of sunset. At some nooks of coral reef around Tanah Lot Temple.

The word of Tanah Lot is consisted of two words that are Tanah word interpreted as a reef looking like gili or isle. Lot or Lod word has meaning the sea. So Tanah Lot is meaning the small island floating on the sea. The location is now called as Tanah Lot has been used at a Megalithic period as a place that looked into holy, proven from the existence of menhir. Pursuant to environmental condition, hence the structure of Tanah Lot Temple is built at irregular reef plain of its angle which is only consisted of one plain yard as Jeroan. Tanah Lot Temple differences with other temples on the island of Bali, Tanah Lot does not have a few pages because it is built on a plain of coral that irregular corners of his home. Inside the actual temple compound itself there are tiered shrines that follow the fundamental elements of Balinese design where the number of levels constructed are symbolic to the complexities of the faith. There are other formations within the area that indicate that the site is not only of great religious importance, but also maintains archaeological value. Temple nestled in the ocean has a ritual or ceremony which takes place every 6 months or 210 days. At that time all the Hindus from different areas in Bali will come to worship in peace and harmony to invoke

Dang Hyang Nirartha” or better known as Pedanda Sakti Wau Rauh” that came from the region of Blambangan, East Java to Bali Island around the 16th century. At the time of the Reign of King Dalem Waturenggong in Gelgel, Bali. Later, he held a sacred journey (Dharmayatra) and walk down the south coast of the Bali Island from the western to the eastern regions. In the journey, in the end he found a beach in Tabanan area (now is Tabanan Regency), not far from the Baraban Village. Furthermore, he saw a rock in the shape of a small island in the sea. In this place he meditate and he felt the vibrations of chastity. So on top of the rock, he suggested setting up a holy building for worship of God then is now the Tanah Lot Temple.

The Uniqueness of Tanah Lot Temple

One of the uniqueness of the owned Tanah Lot is across the street from the temple there are a number of caves in which lived a few sea snakes are colored black and white generally can be met in the coast. Part of its stomach there are no athwart skin, there is only small skin, but this sea water snake very noxious but snake bite case are very seldom happened, because the sea water snake generally very passive. These snakes are very tame and not to be bullied for being considered a forerunner of the keeper and protect the entire area from unseen evil forces. Then there is also the trust in the Tanah Lot Temple there is also the source of holy water, exactly beneath the temple. Holy water is believed can bring sustenance to anyone who drank it.

In order to know the status of Tanah Lot Temple can be realized from the temple history, function and also incoming devotee existence pray when temple ceremony is held. In this case can be realized as follows:

Not be separated from the myths that includes everything from the establishment of the Tanah Lot Temple this temple remains one of the main icons oftourism in Bali Island. This will be an impressive religious tourism travel for you let alone a visit while holding rituals accompanied by the event themed Tanah Lot Spectacular will make a trip on the Bali Island is becoming increasingly a memorable one.

The most popular time to pay a visit to Tanah Lot Temple is late afternoon when the sun begins to settle over the horizon and the temple is silhouetted against the vibrant glow of the sky. The site draws a crowd of travellers who come by bus load to witness this magnificent temple scene against a background of crashing waves.