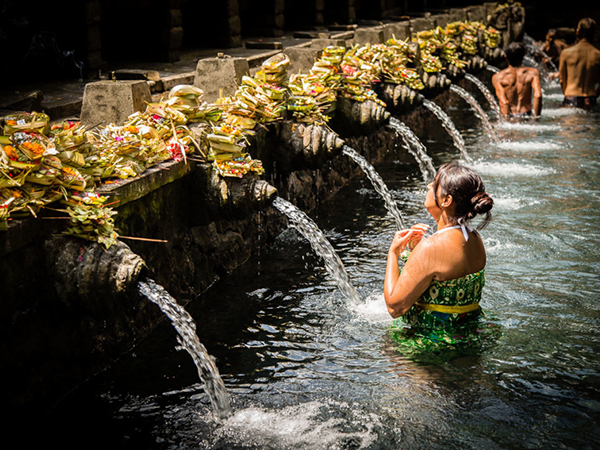 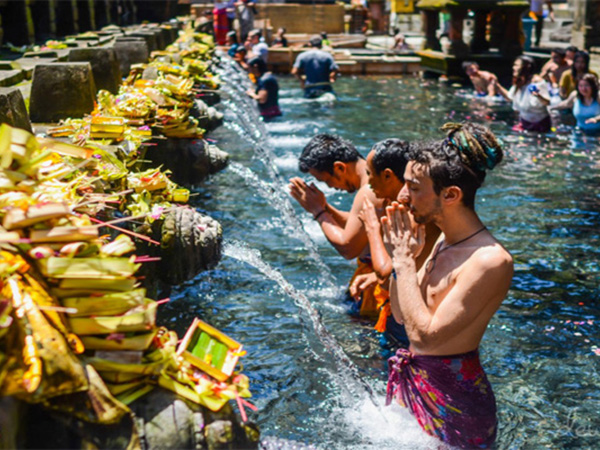 Tirta Empul Temple is located in the village of Tampak Siring, accessible by public transportation from Ubud. The souvenir stands outside the temple specialize in the local craft, carved bone jewelry

The tirta empul temple is built around the sacred spring at Tampak Siring. For more than a thousand years, Balinese worshipers have been drawn to Tirta Empul Temple whose sacred spring is said to have been created by Indra and to have curative properties. The tradition continues almost unchanged at the temple today.Over 1000 years old, the temple and its two bathing places have been used by the people for good health and prosperity because of the spring water's curative powers.

The Tirta Empul Temple includes the traditional Balinese split gate along with shrines to Shiva, Vishnu, Braham, Mt. Batur, and Indra. There is also a large open pavilion in the main courtyard, useful for relaxing in the shade.

But the main attraction at Tirta Empul Temple is a long rectangular pool carved of stone, filled with koi and fed by the sacred spring via 12 fountains. Worshippers first make an offering at the temple, then climb into the main pool to bathe and pray. Many collect the holy water in bottles to take home. Nearby there are two smaller pools fed by the spring.